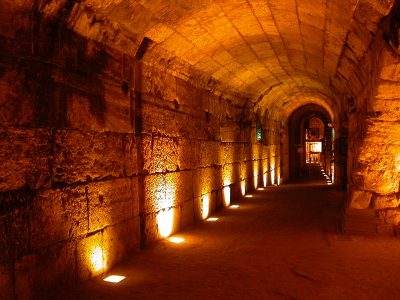 While the open-air portion of the Western Wall is approximately 60 metres (200 ft) long, the majority of its original length of 488 metres (1,601 ft) is hidden underground. The tunnel allows access to the remainder of the Wall in a northerly direction.

In 19 BCE, King Herod undertook a project to double the area of the Temple Mount in Jerusalem by incorporating part of the hill on the Northwest. In order to do so, four retaining walls were constructed, and the Temple Mount was expanded on top of them. These retaining walls remained standing, along with the platform itself, after the Temple was destroyed by the Romans in 70 CE.[citation needed]

Since then much of the area next to the walls became covered and built upon.Part of the Western Wall remained exposed after the destruction of the Temple. Since it was the closest area to the Temple’s Holy of Holies that remained accessible, it became a place of Jewish prayer for millennia.